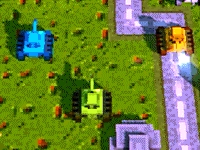 Voxel Tanks 3D is a retro arcade tank game that can be played up to 3 players! There are 3 levels in this game and each level has 8 stages. You can either go solo and finish the game or play it with your friends. Watch out for crates because it has bonuses that can give you an edge in the game. Unlock all the achievements while having fun playing this nostalgic yet challenging game! Voxel Tanks 3D is an wonderful game from our lengthy game listing in friv-1.com. With Voxel Tanks 3D, we've got a large list of Friv 1 games to have fun playing with.