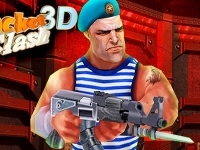 84%
Instructions
How to Play?

Tactical team shooter, full of adrenaline and reckless action will brighten up any waiting time. Lead the resistance squad of special forces opposed to attempts of enemy intelligence agents to establish control over the missile base. In this battle you’ll harness the power of a tactical shortened version of the famous AK and a secret weapon hidden in the depths of the level. The character upgrade system will give you an additional advantage in the next battle. Rocket Clash 3D is an wonderful game from our lengthy game listing in friv-1.com. With Rocket Clash 3D, we've got a large list of Friv 1 games to have fun playing with.